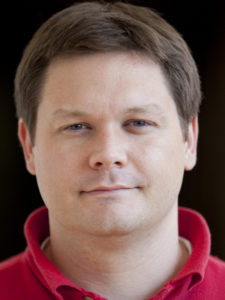 Brian’s was raised in southern New Jersey where he developed his painful, but unbreakable allegiance to Philadelphia sports franchises. Brian received his bachelor’s degree in Chemical Engineering from Cornell University in 2000. During his undergraduate career, Brian worked as a co-op engineer with the 3M company in Springfield, MO (Adhesives Manufacturing) and St. Paul, MN (Traffic Control Materials). After graduation, Brian enrolled in the PhD program at the University of California-Berkeley. There he worked in the laboratory of Prof. Jay D. Keasling at a time when the fields of metabolic engineering and synthetic biology exploded. Brian’s thesis research focused on developing methods of controlling gene expression in bacteria that could be applied to optimizing resource allocation in strains engineered to synthesize pharmaceuticals. His work was used in the development of strains of Escherichia coli capable of synthesizing precursors to the antimalarial terpene, artemisinin. After graduating, he accepted a postdoctoral fellowship from the NIH Great Lakes Regional Center of Excellence for Biodefense and Emerging Infectious Diseases Research to work in the laboratory of Prof. David H. Sherman at the University of Michigan. There, Brian learned to SCUBA dive and studied how six Bacillus anthracis enzymes assemble a natural product essential for iron acquisition and pathogenesis. His 18-month residency introduced him to the world of polyketide and non-ribosomal peptide biosynthesis and provided a strong foundation in classical protein purification and analytical techniques.

Brian joined the UW-Madison faculty in the summer of 2007 as an assistant professor to study the use of synthetic biology to address the grand challenge of sustainable chemical production. The Pfleger lab’s early work fell in two areas: 1.) development of oleochemical producing bacteria through a combination of synthetic biology, systems biology, and biochemical engineering studies and 2.) development of gene expression tools for engineering non-model organisms such as cyanobacteria that can convert light and carbon dioxide to higher value chemicals. Brian’s group is comprised of mixture of chemical engineers, microbiologists, biochemists, and environmental chemists recruited from his courtesy appointments in Biomedical Engineering, the Microbiology Doctoral Training Program, and the graduate program in Cell and Molecular Biology. The combined skillset has enabled his group to approach problems at the interface of biology and engineering from all sides. Brian was promoted to the rank of Associate Professor in 2013 and spent part of his first sabbatical learning systems biology methods from Prof. Jens Nielsen’s group in Sweden. Brian was named the Walter J. and Cecile Hunt-Hougen Faculty Scholar in 2015. Brian’s research and scholarship has been recognized with several awards, listed below.